MAY 27, 2013 – EXCLUSIVE BBC AND MNS INTERVIEW WITH GHASSAN SHITTO OF THE NATIONAL COALITION OF SYRIAN REVOLUTION AND ODOROUS FORCES (NACOSROF)!

“My God, those Turkish dentists!”, comments Mr. Ghassan Shitto during his interview with MNS and BBC on Imrali Island.  He just had a listening device installed in his left upper molar.
Mr. Shitto of NACOSROF sat with Brunhilde Liebesbombe of the Mercury News Service (MNS) and Lies La Doucette of the British Baloney Corporation (BBC).  Ms. La Doucette was formerly known as Lyse Doucet before she joined the Al-Jazeera Board of Governors in 2011.
MNS:  Thank you for joining us here on Imrali Island.  Is that Abdallah Ocalan of the PKK standing there?
SHITTO:  Why, yes.  He’s allowed to monitor guests on this island.  Hello, Abdallah.  (no response)
BBC:  Hi, Monsieur Shitto.  I’m Lies La Doucette of the BBC.  Is it true you dodged the draft in Syria at the age of 17 and headed for Indiana in the U.S.?
SHITTO:  Are you suggesting I’m a convicted felon in my homeland?
BBC:  No. Not all.  I mean……But, are you a convicted felon?
SHITTO:  Only in the minds of the monster tyrant atheist Assad.  Yeah, sure.  He’s embattled, you know.
He’s surrounded.  He’s beleaguered.  He’s only got two months left in power.  Our forces are on the march.
MNS:  But, Mr. Shitto.  Your FSA, if you like, is about to collapse in Al-Qusayr and is completely surrounded.
SHITTO: Lies. Lies!
BBC:  Yes, Mr. Shitto.
SHITTO:  No! I mean it’s all lies.  Our forces are merely setting a trap for Assad’s Shabbiha.  They are the ones who are surrounded.
BBC:  But, Mr. Shitto.  Some people are accusing you of being no different from Baghdad Bob, one  Muhammad Said Al-Sahhaf.  How do you answer such accusations?
SHITTO:  I thought you worked for the BBC?  How dare you ask me such questions?  Sahhaf was a Shi’ite apostate.  I am a true Sunni.  But, (sighs) we are all Muslims who must learn to love one another – as soon as we reestablish the Abbasid Caliphate in Baghdad!  (Turns to a man in the corner who looks just like Hakan Fidan, the head of the MIT).
MNS:  My Heavens. Himmel!!  Isn’t that the chief of Turkish Intelligence standing there next to the water closet?
SHITTO:  No.  It’s not.  (He turns away furtively)  That’s…that’s…..that’s…..George Sabra!  He’s staying with me on this island.  They look very much alike. 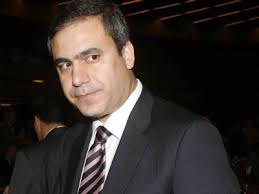 George Sabra, seen above, looks intently at Mr. Shitto during his interview.
BBC:  How would you describe the meetings you have had in Paris, Madrid, Istanbul, Amman, Doha, Cairo?

SHITTO:  Very educational.  But, Madrid is my favorite.  They don’t have bullfights in Amman, you know.

BBC:  What I mean is: What will it take to get a consensus among the representatives of the many Syrian organizations?

SHITTO:  Well.  When Assad steps aside, we will have a consensus.

SHITTO:  You’re German aren’t you?……….(pauses)  If he doesn’t step aside then I guess it will be civil war.

BBC:  But, you already have a civil war!

SHITTO:  My tooth is hurting again…….Then, we’ll have another civil war.  And another. And another until Assad takes my place and, then, we’ll have the Mother of All Civil Wars.  I’ll be in Texas, of course.  I’m too old to fight.  (Becomes visibly angry and looks at Lies La Doucette).  I’m just a draft dodger, right?

MNS:  If you cannot get a consensus about attending the next Geneva-2 Conference, what will you all do?

SHITTO:  Well, Ahmad is planning a career in Islamist radio talk shows.  I think, George, that Christian fella, is going to be a singer.  I have a Kirby Vacuum Cleaner franchise in Austin. You got any better ideas?

“And a one, and a two, and a three”, mutters the versatile Islamist radio talk show freak, Ahmad Muaz Al-Khatib Al-Hasani, on his Canadian radio variety show: “God Speaks in Many Flavors – All Halal”.  You can listen to him on CKIA radio every day and discuss why Muslims shouldn’t eat peanut butter.  To his fans he is known as “Moe-Joe Walk-Man”.

George Sabra, seen here at his poorly-attended concert in Gaziantep, Turkey, titled: “Captain Kangaroo Serenades Mr. Greenjeans”.  His signature song: “I Left My Ticker in Abu Sakkar’s Knicker”, was not received very well by the surly crowd.  His show-stopper song: “Wallah, Wallah”, died on the spot.


BBC:  Well.  Maybe if you attended the Geneva 2 Conference, something might change.

SHITTO:  But, Prince Porky of Qatar won’t pay for the trip.  He doesn’t want anybody to go anywhere but Doha.   I can’t afford all these trips.

BBC:  Won’t the American’s pay for it?  They are even richer than Prince Porky.

SHITTO:  I don’t think Obama will pay for anything but my ticket back to Texas.  He is very upset you know about all those so-called royals.  He is even acting like them.  So stingy, you know.

His Royal Highness, Barack Hussein Obama, seen signing a check for a one-way ticket back to Texas for everybody’s favorite misfit, Ghassan Shitto.  (courtesy: theflyingcameldotorg.wordpress.com)
BBC:  Would you be willing to sit down at the same table with President Assad’s representative and discuss peace?

SHITTO:  You must be kidding.  I’d be arrested for draft evasion!  I can’t unless Assad comes to Crawford, Texas.  We could have a barbecue and discuss everything.

MNS:  We are certain Mr. Assad will read your comments.  Perhaps, Lakhdar Brahimi,  the U.N. and A.L. negotiator,  can arrange the trip.

SHITTO:  I can’t promise Prince Fatso will pay for Assad’s ticket.  But, do you think it’s possible he’d come?

MNS:  It’s about as possible as your becoming Syria’s Prime Minister.

BBC:  Thank you, so much, Mr. Shitto for an enlightening conversation.

SHITTO:  And by the way.  Next time, wear something on your heads.  I feel uncomfortable around female infidels.

(At that moment, Brunhilde pulled out her favorite cap and wore it to please Mr. Shitto of the NACOSROF.  She belted out an aria for him straight out of Wagner.)

Guest
Level 0 - Anonymous
Anonymous
Offline
#2334
You can flag a comment by clicking its flag icon. Website admin will know that you reported it. Admins may or may not choose to remove the comment or block the author. And please don't worry, your report will be anonymous.

@ Ziad you really need to find a spanish translator for your site ,because there is a huge hispanic community of many millions some with political power and will never support the atrocities US does in Syria. Not a chance. that could have a big pressure to stop US agression against Syria. The more people is aware of the illegal proxy terrorist war in Syria ,the more difficult will be for Republicans and democrats to justify their actions . There is a huge blackout ,and censoring about what happens in Syria in Latin America. Since media like CNN and Fox… Read more »

Guest
Level 0 - Anonymous
Anonymous
Offline
#2330
You can flag a comment by clicking its flag icon. Website admin will know that you reported it. Admins may or may not choose to remove the comment or block the author. And please don't worry, your report will be anonymous.

Good satire Ziad! We need a laugh in between reports such as the martyrdom of young Yara Abbas (rip.) and children being traumatized and other victims of western cowardliness. I hope Mr.ghas “of the stinking pile of excrements” Shitto wakes up beside or rather UNTHER that awful and most certainly very voluptuous lady Bruhnhilde, after any of those cocktail parties he´s invited to. That would be a most suitable punishment and end of his sorry life, as he wouldn´t be able to breathe from under that mountain of bratwurst certified fleish… ANNA has some rather interesting videos from the battlefront… Read more »

Guest
Level 0 - Anonymous
Ziad Fadel
Offline
#2333
You can flag a comment by clicking its flag icon. Website admin will know that you reported it. Admins may or may not choose to remove the comment or block the author. And please don't worry, your report will be anonymous.

Thank you for your kind kind remarks, Mikhas. I certainly would hope that Brunhilde and Shitto will make a lovely couple. Pretty big lady, though. Ziad

Guest
Level 0 - Anonymous
Anonymous
Offline
#2324
You can flag a comment by clicking its flag icon. Website admin will know that you reported it. Admins may or may not choose to remove the comment or block the author. And please don't worry, your report will be anonymous.

http://www.presstv.ir/detail/2013/05/27/305769/hague/
GB wants to provide Syrian terrorists with weapons even if other EU states disagree

Guest
Level 0 - Anonymous
Anonymous
Offline
#2327
You can flag a comment by clicking its flag icon. Website admin will know that you reported it. Admins may or may not choose to remove the comment or block the author. And please don't worry, your report will be anonymous.

basically EU is just one of zionist shill and brits are main pillar of zionism in europe…so it can dictate whatever it wants..the event at al qusayr is a wake up call for FSA foreign sponsors…if wahhabi zombies lose in this battle things are gonna be hard in the future for israel,saudis,turkey,jordan and qatar….because they knew that SAA will have experience in urban combat and anti terror warfare, with this skill SAA would revenge their anger to them…this unacceptable…

Guest
Level 0 - Anonymous
Anonymous
Offline
#2328
You can flag a comment by clicking its flag icon. Website admin will know that you reported it. Admins may or may not choose to remove the comment or block the author. And please don't worry, your report will be anonymous.

It’s a f*cking disgrace, but true. This whole democracy we are living in is a big farce, we don’t get to say sh*t about what happens, when it comes to plots like these, the opinion of citizens is ignored, just like it was when we had a referendum and and a majority was against joining the EU. Now, we are enslaved in a democracy and noone gives a damn about what the citizens actually want of say. For example on dutch forums over 80% of people are against the stop of the weapon sanctioning, but noone asks them. That’s democracy… Read more »

Guest
Level 0 - Anonymous
Ziad Fadel
Offline
#2332
You can flag a comment by clicking its flag icon. Website admin will know that you reported it. Admins may or may not choose to remove the comment or block the author. And please don't worry, your report will be anonymous.

Actually, the FSA has already lost Al-Qusayr. The only question now is how many will die in their Alamo? That’s all folks. Ziad

Guest
Level 0 - Anonymous
jo6pac
Offline
#2323
You can flag a comment by clicking its flag icon. Website admin will know that you reported it. Admins may or may not choose to remove the comment or block the author. And please don't worry, your report will be anonymous.

Another idiot headed to Syria and hopefully he’ll be captured by the Syrian Army.